While the world of work has been making strides to make it a more equitable place for women and minorities, it's still not where it should be – but maybe not for the reason you think. Despite the rise of diversity, equity, and inclusion (DEI) initiatives, corporate responsibility, fair hiring practices, and an emphasis on representation – the system is still geared to better serve men. Hewlett Packard found that women only apply for jobs when they have 100% of the qualifications listed in the job description, whereas men are comfortable applying when meeting just 60%. This is a large detriment to women in the workforce because it limits their visibility to companies that are hiring. Here is how you can help close this confidence gap and level the playing field when it comes to job applicants.

What the Confidence Gap Doesn’t Address

However, this finding doesn’t address all the variables behind applying to jobs. As many have speculated since the original Hewlett Packard findings were released, this confidence gap could be attributed to several other factors.

A study by LinkedIn found that women are 14% less likely to apply to jobs they review than men, even though they are browsing roles at the same rate. This finding suggests that the gap may not be about confidence, but rather more about their perceived success rates. Women want to respect the guidelines of the posting and tend to only apply to jobs they believe they could actually be offered. In this instance, this selective nature is attributed to a respect for everyone’s time and energy, and not a lack of confidence.

Recruiting is a Human-Based System

Although recruiting has been automated by applicant tracking systems and other advanced technology, it’s still largely a human-based system and is therefore affected by human faults. That same LinkedIn report found that when women appear in a recruiter's search results, they are 13% less likely to be viewed than a man’s profile in the same search results. Gender bias is an unconscious bias that can play into a person’s perceived notion of a candidate, and unfortunately can also stack the odds against women.

Just as individuals can harbor unconscious bias, so can organizations. Oftentimes, systems within an organization can inadvertently reward men more than women. The first example that often comes to mind is the “old boys club” that tends to promote men at greater rates than women. When hiring, bonuses, promotions, and other company recognition is based on favor from leadership, it can create gender biased results.

How to Close the Confidence Gap – and Address Its Ancillary Issues

No matter the source, whether it’s lack of confidence or biases in the hiring system, it’s clear to see that there is still room for improvement when it comes to closing this gender-based gap. Here are some steps you can take at your organization to ensure an equitable candidate journey for everyone.

Address the Confidence Gap in Your Job Postings

Many companies have started to adopt jargon within their own postings that directly addresses the confidence gap proven by Hewlett Packard. At Blue Signal, we recently implemented the same practice and began including the following phrasing in all our own internal job postings:

“Don’t meet every single requirement? Studies have shown that women, minorities, and individuals that identify as a part of the LGBTQ+ community are less likely to apply to jobs unless they meet each and every qualification listed on a job description. At Blue Signal, we believe in more than a checklist when it comes to finding the perfect person for a role. In order to further build more inclusive and diverse workplaces, and should this role sound exciting to you, we encourage you to apply anyway. You may be just the candidate we are looking for.”

Create something similar that fits the tone and messaging of your own company. This way, when women or other minority groups go to apply, they will see this as encouragement and a direct reflection of your organization’s commitment to equity. You’re sure to see results as your applicant pool becomes more diverse!

Ensure Equitable Practices within Hiring, Promotions, and Other Internal Recognition

Most importantly, make sure you are auditing your current internal systems to ensure equitable practices throughout the candidate journey. Equity must be prioritized after hiring in order to make a true, lasting impact. Make sure there are concrete, well-communicated goals in place for promotions, bonuses, raises, and other recognition so it’s not based on favor. Then, follow up by monitoring the progress of all employees through their careers to make sure both men and women are being promoted at the same rate.

Finally, have the conversation and take the proper steps to remove gender bias in your recruiting and hiring processes. Educate your hiring managers on gender bias so that they can address it within themselves. Leverage ATS systems that remove names and pronouns in resumes so that hiring managers are making selections on candidates to screen that aren’t based on presumed gender. Work with recruiting firms that address gender bias in their processes.

Unfortunately, the hiring systems in place today inequitably favor men over women. It’s our job to make sure we actively counteract this by addressing gender biases in our business practices. By taking accountability and adjusting our processes, together we can close the confidence gap.

To learn more or get started on your own hiring equity journey today, reach out to Blue Signal’s DEI certified recruiting team. As your partners in the hiring process, we’re here to get your organization on the right track.

Blue Signal’s own female empowerment initiative, BSS Women of the Workplace, has just concluded its best year yet! Founded in 2019, BSS WOW has not only impacted those within the organization, but also the greater community as a whole. With the mission of “promoting the education, connection, and empowerment of women (and those who support women) and their contributions to the broader goals of Blue Signal and beyond,” we’ve supported our goals through several purposeful actions. Despite being geographically dispersed, BSS WOW was able to meet virtually to discuss important topics, bond as a team, and participate in philanthropy.

This year, we did an activity on gendered language in the workforce where we examined the unintentional yet inherent biases that many work-related terms hold. By examining these terms and their biases, we as a team were able to better understand equity and how we can combat gendered bias in our communication with clients, candidates, internally with colleagues, and externally as a whole. As a group, BSS WOW completed a LinkedIn Learning Course and certified 100% of our members on Women Helping Women Succeed in the Workplace.

Additionally, we reviewed several articles surrounding similar topics. In one meeting, the group read “She Wants to Kill the Girl Boss.” The article sparked thoughtful conversations surrounding confirmation bias, intersectionality, discrimination, and privilege and how that all plays into labels. In another meeting, we reviewed a summary of the popular Sheryl Sandberg book, Lean In. We discussed gender inequality, factors that can help or hinder women’s careers, and how we can all help women to achieve their goals. Another hot topic surrounded the child-care crisis resulting from the COVID-19 pandemic. This Washington Post article predicted that COVID-19 would dramatically set women back, given that many mothers had to choose between motherly duties and their careers.

Finally, at our end-of-the-year holiday party, we discussed women who we admire. Many notable professionals were named, including Brittney Packnett Cunningham, Abby Wambach, Sara Blakely, and Rachel Hollis. Each of these articles and discussions facilitated actionable insights into bettering ourselves as people and as professionals.

In creating a safe space to discuss such topics, it’s important to make it fun — it’s simply good strategy! We found so much joy in conducting alternate activities that they’ve become a staple in every meeting. We bonded over things like Secret Santa; the Rose, Bud, and Thorn activity; and more. Our members shared feedback on Blue Signal’s Women of the Workplace, stating that they “truly enjoy the bonding exercises. It can feel extremely isolated when working remote - so it's helpful to have the connection with others on a deeper level.” Others said they “always leave the conversations feeling refreshed with a new perspective and feeling closer to the team!” By becoming exactly what our company needed, either through connection or just as a good mental reset, this group has become its own community. 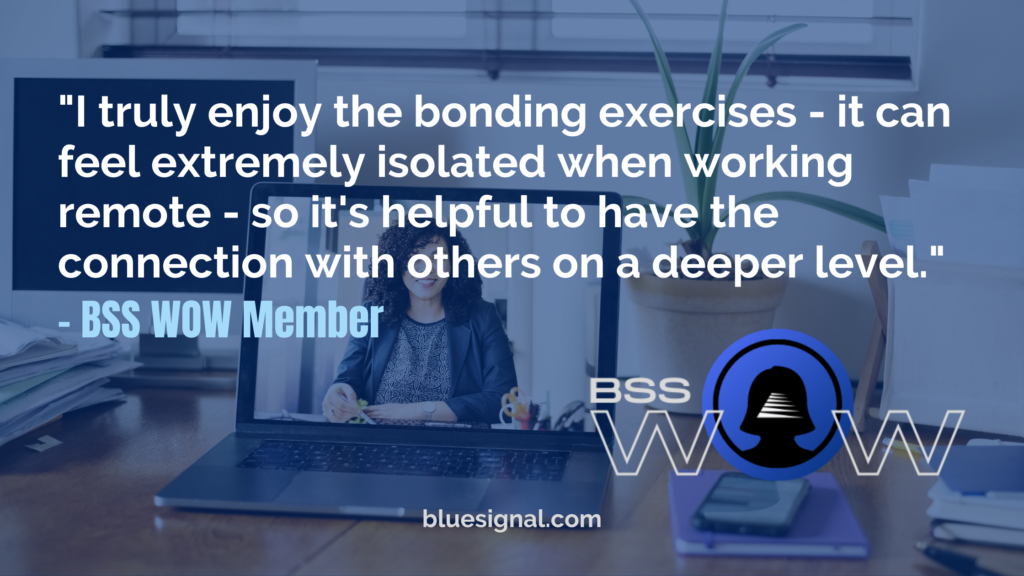 Giving back has been a cornerstone to Blue Signal’s company culture since our inception. It’s no wonder that BSS WOW would want to participate, but with their own unique spin. Since 2020, BSS WOW has been supporting Live and Learn AZ. Live and Learn is a local non-profit that seeks to empower women in the Phoenix area to break the cycle of generational poverty. This year we continued our resume writing support and interview coaching collaboration, effectively helping 18 women with their resumes. Of those 18, six were hired into new roles.

One Live and Learn client was very discouraged about applying for jobs and wasn’t sure when she would be able to find employment to support her family. She was referred to the BSS WOW resume writing service, where she learned to tailor her resume to the job she would be applying for. After speaking with BSS WOW, she found renewed energy and confidence in the job search, and she was able to nail a job in healthcare. Stories like these are what inspire us to work to support those in our community. This year, with our newly developed career service, we were able to also refer these Live and Learn clients to Resume and Career Services, powered by Blue Signal. With this, we hope to get even more women educated, empowered, and employed.

But we didn’t stop there. BSS Women of the Workplace also donated four laptops to the cause. We donated three full Thanksgiving meals for Live and Learn’s Give Thanks food drive. We went live with Live and Learn on Instagram to help them generate donations for Giving Tuesday. Their movement to #EmpowerWomen and #BreakTheCycle resulted in $5,160 in overall donations! For Christmas, BSS WOW also sponsored three families from Live and Learn. The entire Blue Signal organization stepped up to help create an incredible holiday for these women and their families. 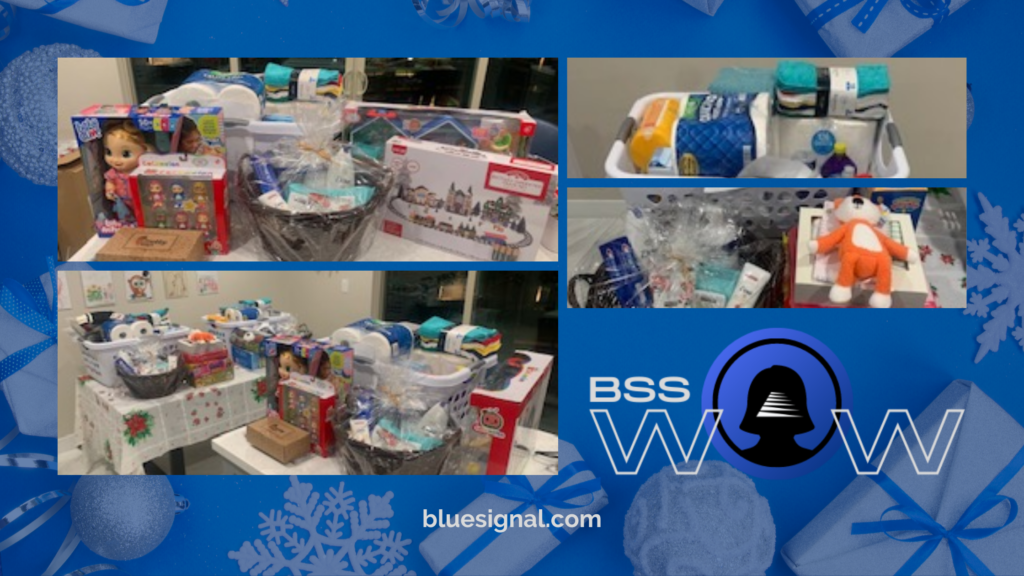 Reflecting on 2021 and The Year Ahead

2021 brought with it so many new opportunities for growth. Blue Signal’s Women of the Workplace has been humbled by this experience, and we are all excited for what’s next. We plan on continuing our virtual meetings, planning more exciting activities, and finding new ways to give back to our communities. For 2022, we want to focus on topics such as mental health, financial literacy, and equity. We will continue to learn more about women in leadership, and hope to make our own mark on that space.

If this purpose and these projects speak to you, contact us to see how you can get involved. Whether that means joining in on the fun yourself by applying to work with us, or by educating us on your own current organization and how we can partner, don’t hesitate to reach out.

Here are several resources BSS WOW discussed and collected throughout the year. Please leverage these to explore on your own the topics we covered.