While the world of work has been making strides to make it a more equitable place for women and minorities, it's still not where it should be – but maybe not for the reason you think. Despite the rise of diversity, equity, and inclusion (DEI) initiatives, corporate responsibility, fair hiring practices, and an emphasis on representation – the system is still geared to better serve men. Hewlett Packard found that women only apply for jobs when they have 100% of the qualifications listed in the job description, whereas men are comfortable applying when meeting just 60%. This is a large detriment to women in the workforce because it limits their visibility to companies that are hiring. Here is how you can help close this confidence gap and level the playing field when it comes to job applicants.

What the Confidence Gap Doesn’t Address

However, this finding doesn’t address all the variables behind applying to jobs. As many have speculated since the original Hewlett Packard findings were released, this confidence gap could be attributed to several other factors.

A study by LinkedIn found that women are 14% less likely to apply to jobs they review than men, even though they are browsing roles at the same rate. This finding suggests that the gap may not be about confidence, but rather more about their perceived success rates. Women want to respect the guidelines of the posting and tend to only apply to jobs they believe they could actually be offered. In this instance, this selective nature is attributed to a respect for everyone’s time and energy, and not a lack of confidence.

Recruiting is a Human-Based System

Although recruiting has been automated by applicant tracking systems and other advanced technology, it’s still largely a human-based system and is therefore affected by human faults. That same LinkedIn report found that when women appear in a recruiter's search results, they are 13% less likely to be viewed than a man’s profile in the same search results. Gender bias is an unconscious bias that can play into a person’s perceived notion of a candidate, and unfortunately can also stack the odds against women.

Just as individuals can harbor unconscious bias, so can organizations. Oftentimes, systems within an organization can inadvertently reward men more than women. The first example that often comes to mind is the “old boys club” that tends to promote men at greater rates than women. When hiring, bonuses, promotions, and other company recognition is based on favor from leadership, it can create gender biased results.

How to Close the Confidence Gap – and Address Its Ancillary Issues

No matter the source, whether it’s lack of confidence or biases in the hiring system, it’s clear to see that there is still room for improvement when it comes to closing this gender-based gap. Here are some steps you can take at your organization to ensure an equitable candidate journey for everyone. 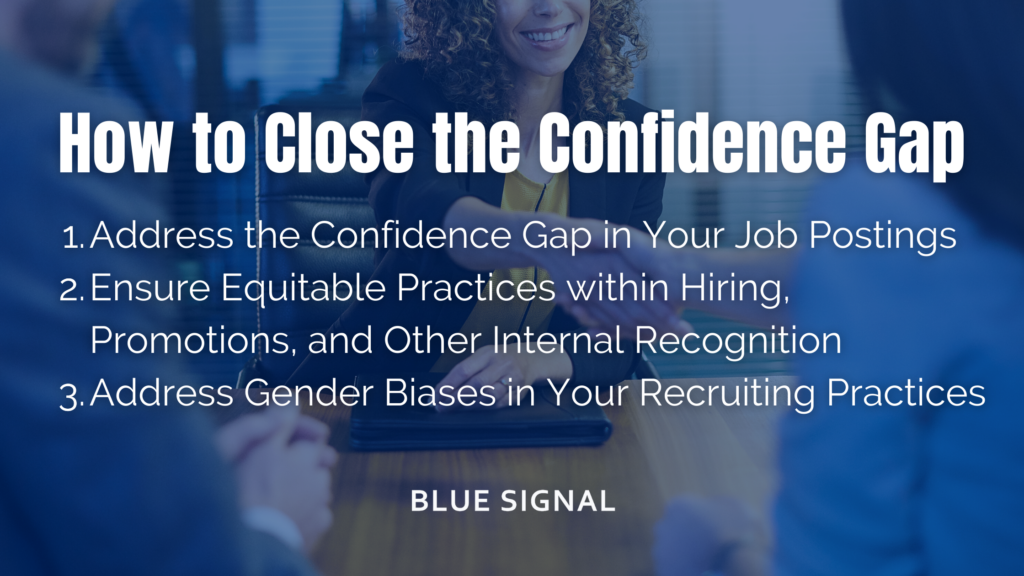 Address the Confidence Gap in Your Job Postings

Many companies have started to adopt jargon within their own postings that directly addresses the confidence gap proven by Hewlett Packard. At Blue Signal, we recently implemented the same practice and began including the following phrasing in all our own internal job postings:

“Don’t meet every single requirement? Studies have shown that women, minorities, and individuals that identify as a part of the LGBTQ+ community are less likely to apply to jobs unless they meet each and every qualification listed on a job description. At Blue Signal, we believe in more than a checklist when it comes to finding the perfect person for a role. In order to further build more inclusive and diverse workplaces, and should this role sound exciting to you, we encourage you to apply anyway. You may be just the candidate we are looking for.”

Create something similar that fits the tone and messaging of your own company. This way, when women or other minority groups go to apply, they will see this as encouragement and a direct reflection of your organization’s commitment to equity. You’re sure to see results as your applicant pool becomes more diverse!

Ensure Equitable Practices within Hiring, Promotions, and Other Internal Recognition

Most importantly, make sure you are auditing your current internal systems to ensure equitable practices throughout the candidate journey. Equity must be prioritized after hiring in order to make a true, lasting impact. Make sure there are concrete, well-communicated goals in place for promotions, bonuses, raises, and other recognition so it’s not based on favor. Then, follow up by monitoring the progress of all employees through their careers to make sure both men and women are being promoted at the same rate.

Finally, have the conversation and take the proper steps to remove gender bias in your recruiting and hiring processes. Educate your hiring managers on gender bias so that they can address it within themselves. Leverage ATS systems that remove names and pronouns in resumes so that hiring managers are making selections on candidates to screen that aren’t based on presumed gender. Work with recruiting firms that address gender bias in their processes.

Unfortunately, the hiring systems in place today inequitably favor men over women. It’s our job to make sure we actively counteract this by addressing gender biases in our business practices. By taking accountability and adjusting our processes, together we can close the confidence gap.

To learn more or get started on your own hiring equity journey today, reach out to Blue Signal’s DEI certified recruiting team. As your partners in the hiring process, we’re here to get your organization on the right track.