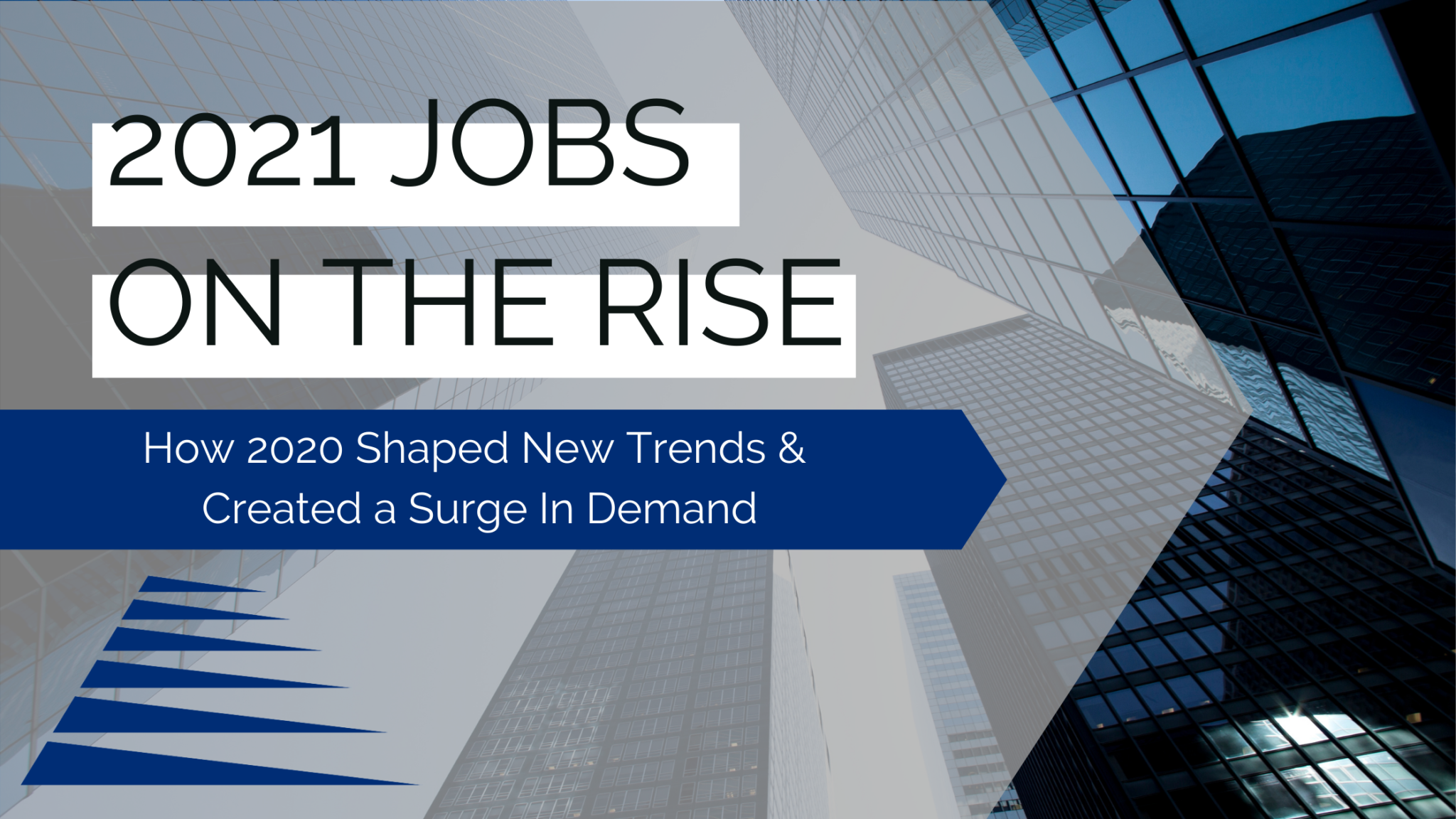 As we settle into 2021, it has become evident how much has shifted in the workforce - especially considering what jobs are in demand. 2020, the year of unprecedented times, has brought us a completely new list of roles and industries that are rapidly hiring and ready to be capitalized on. Diversity and inclusion consulting roles, for example, have drastically increased as businesses seek dedicated staff behind these crucial initiatives. Flexible schedules and more positions offering work from home options have also played a big part in the job market further opening up. Big cities such as New York City, Los Angeles, and Washington D.C. still lead with the majority of open jobs, but there is much more freedom when it comes to job hunting compared to a year ago. The spike in the number of open roles and those looking for work also directly relates to the high amount of layoffs that took place in early 2020. Those who were laid off or took time to be at home with family due to the pandemic are now looking to enter back into the workforce as the vaccine is being adopted and those roles are reopening. In this blog, Blue Signal breaks down specific industry trends to look at what caused such an increased demand in jobs, specifically within D&I, healthcare, E-commerce and marketing, tax roles, and education.

Navigating 2020 was new territory for everyone - while some industries and businesses were hit harder than others, everyone was forced to pivot and adjust as best they could. The hospitality industry for example, faced one of the biggest hits across all industries, but it was incredible to see how these entertainment businesses were able to reimagine their brand and service offerings to match the needs of consumers. In a previous blog, we shared how food and beverage companies rose to the challenge, with some global distilleries shifting production from vodka and gin to hand sanitizer. LinkedIn recently created a list of the most in-demand jobs for 2021 and they found that while fields such as aviation and hospitality were affected the most, other areas like healthcare, education, and finance had to drastically ramp up hiring to meet increased demand. 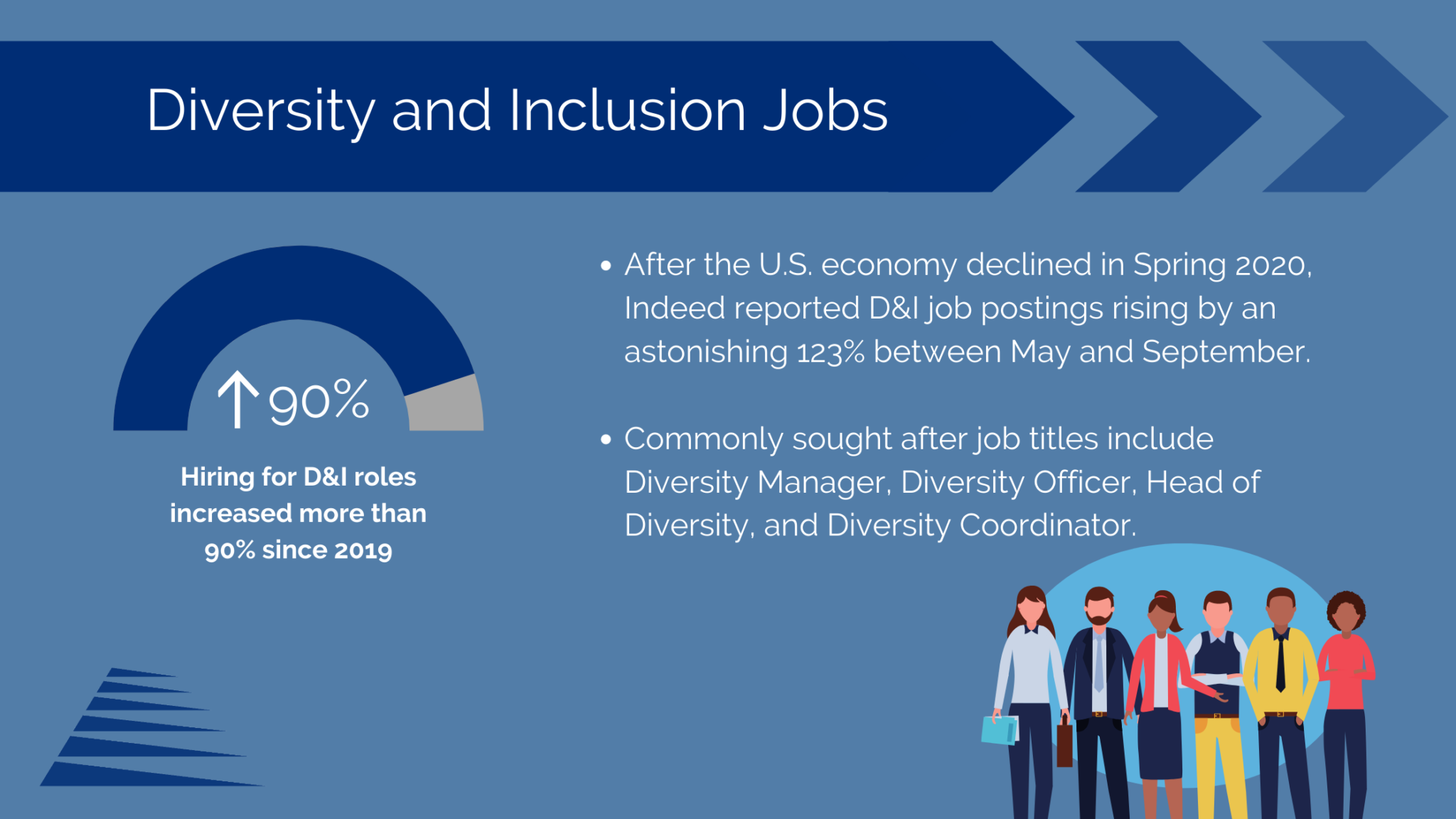 Across all industries, large or small, businesses are recognizing the necessary action they must take when it comes to being vocal and thoughtful about D&I within their own organizations. For a lot of businesses, this is something they are dealing with publically for the first time. After the Black Lives Matter movement and many other global civil rights campaigns that took place last year, companies are speaking to their customers’ and audiences’ interests, and making plans to support these causes internally. To carry out these mission statements, many companies are seeking to hire professionals in new roles and even full departments, to develop and manage these policies and actions surrounding diversity and inclusion. Indeed reported that “Between September 2019 and September 2020, Indeed job postings in diversity, inclusion and belonging have risen 56.3%—from 140 jobs per million to 219. More significantly, after the U.S. economy declined in Spring 2020, the DI&B industry recovered quickly, with job postings rising by an astonishing 123% between May and September.” For examples and actionable advice on how your company can go about D&I initiatives head-on, check out our recent blogs on Diversity, Equity, and Inclusion at Blue Signal and The Importance of Diversity & Inclusion in Recruiting, where we mention what we’re doing to enforce this change both internally and within the recruitment industry as a whole. 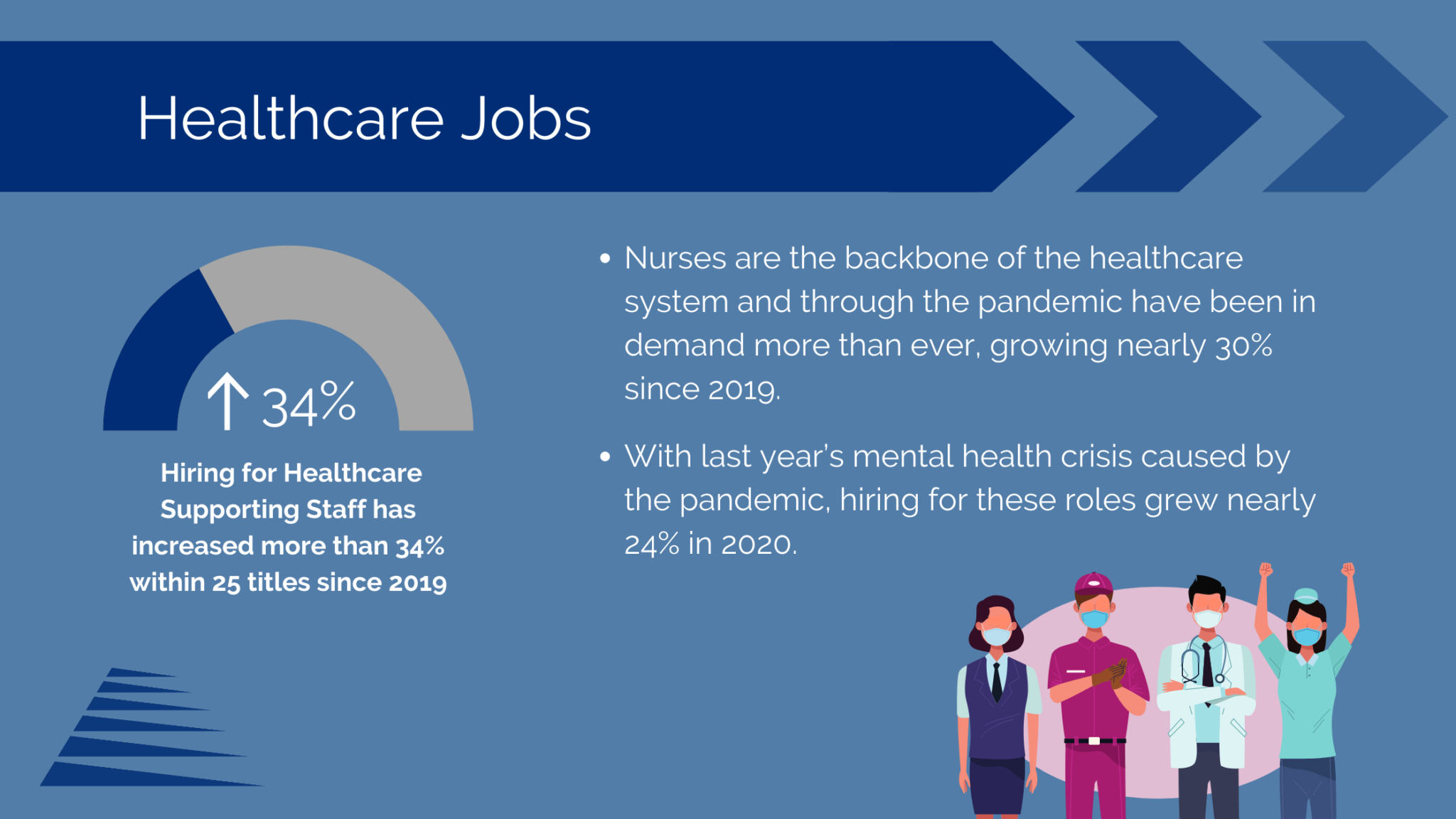 Not surprisingly, the healthcare industry has completely opened up and still seems to have a never-ending demand for staff, specialists, researchers, and volunteers due to the global health crisis. This has created a huge increase in opportunity and, for those who were contemplating making a career change into the medical field, it could not have come at a better time. Due to such an uptick in urgency for professionals like these, it is the easiest it’s ever been to make this transition, with quicker onboarding processes and more options for accelerated certifications and education programs available. Seaman says, “Many of these roles can be trained for remotely and don’t require a four-year degree.” Though front-line workers such as medical assistants and physicians are always in demand, another newcomer to these highly sought-after positions is in home health. When friends and family members weren’t able to visit their loved ones in nursing homes and assisted living facilities for months at a time, many families sought new plans for their elders’ care. Even though assisted living staff is still in high demand, at-home care workers have quickly grown in need as people would prefer their loved ones to be recovering at a private home rather than in a shared living space in close quarters with others. 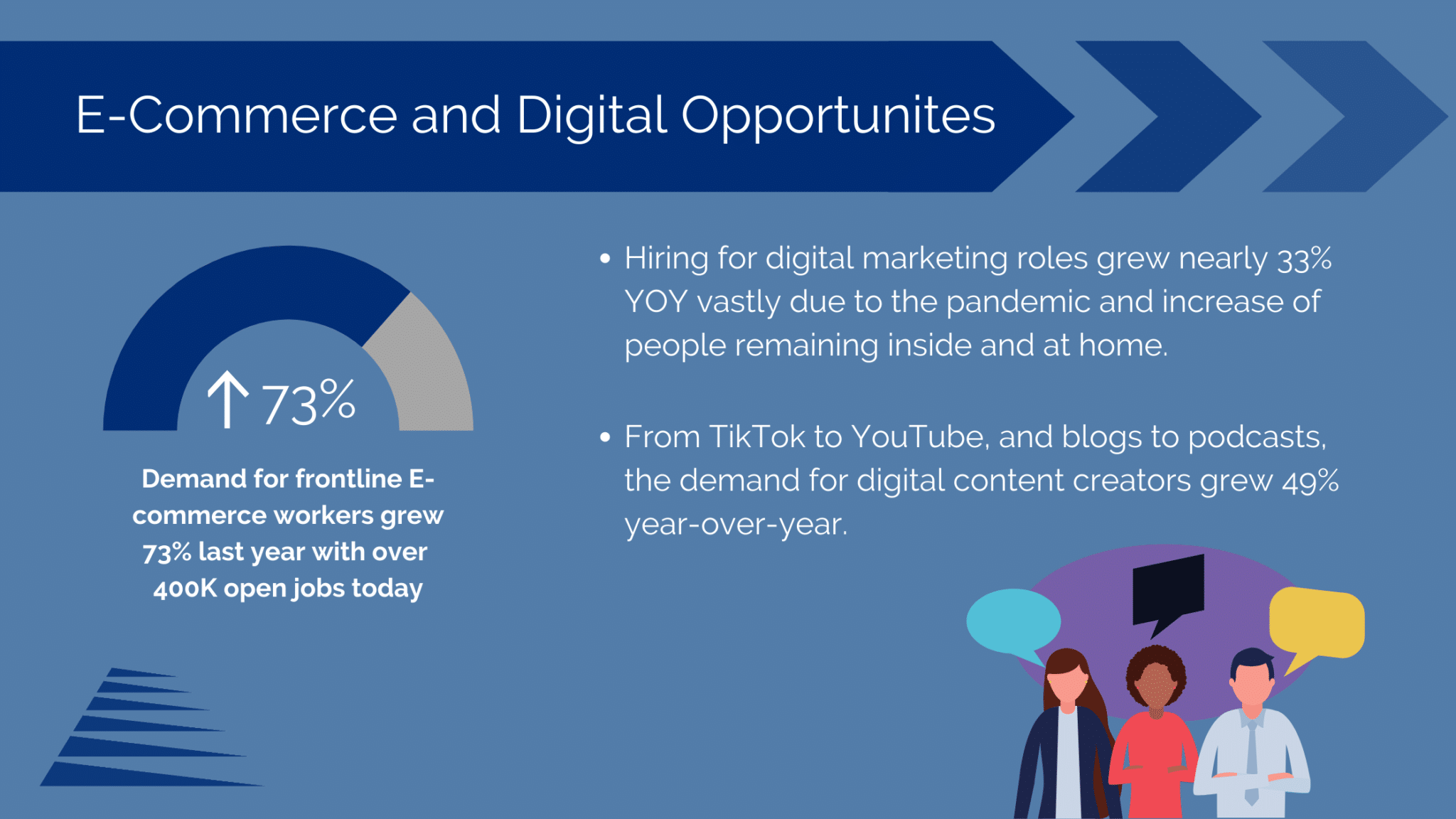 As we’ve predicted since the beginning of the internet, the ability to generate online business and establish a digital brand presence proved itself to be not only beneficial, but a necessity, throughout the pandemic. The results were clear, businesses that had already established their E-comm brand online and invested in digital marketing and brand awareness prior to the global shutdown, skyrocketed. Those who were unable to pivot and redirect their business online found it difficult to stay afloat. The new wave of online and virtual communities has also brought in many ideas that led to new entrants to the space. Social media and digital marketing professionals, as well as graphic designers, web developers, and AI engineers are in high demand now more than ever as businesses pivot their focus toward updated and user-friendly websites. With the E-commerce world hitting record numbers - shipping and fulfillment jobs reactively increased in demand, too. Products are being consumed online in never before seen volumes, and as a result businesses are essentially required to order more inventory, invest in larger warehouse space, and hire more staff to support these larger volumes of picking, packing, shipping, returns, and customer service jobs. 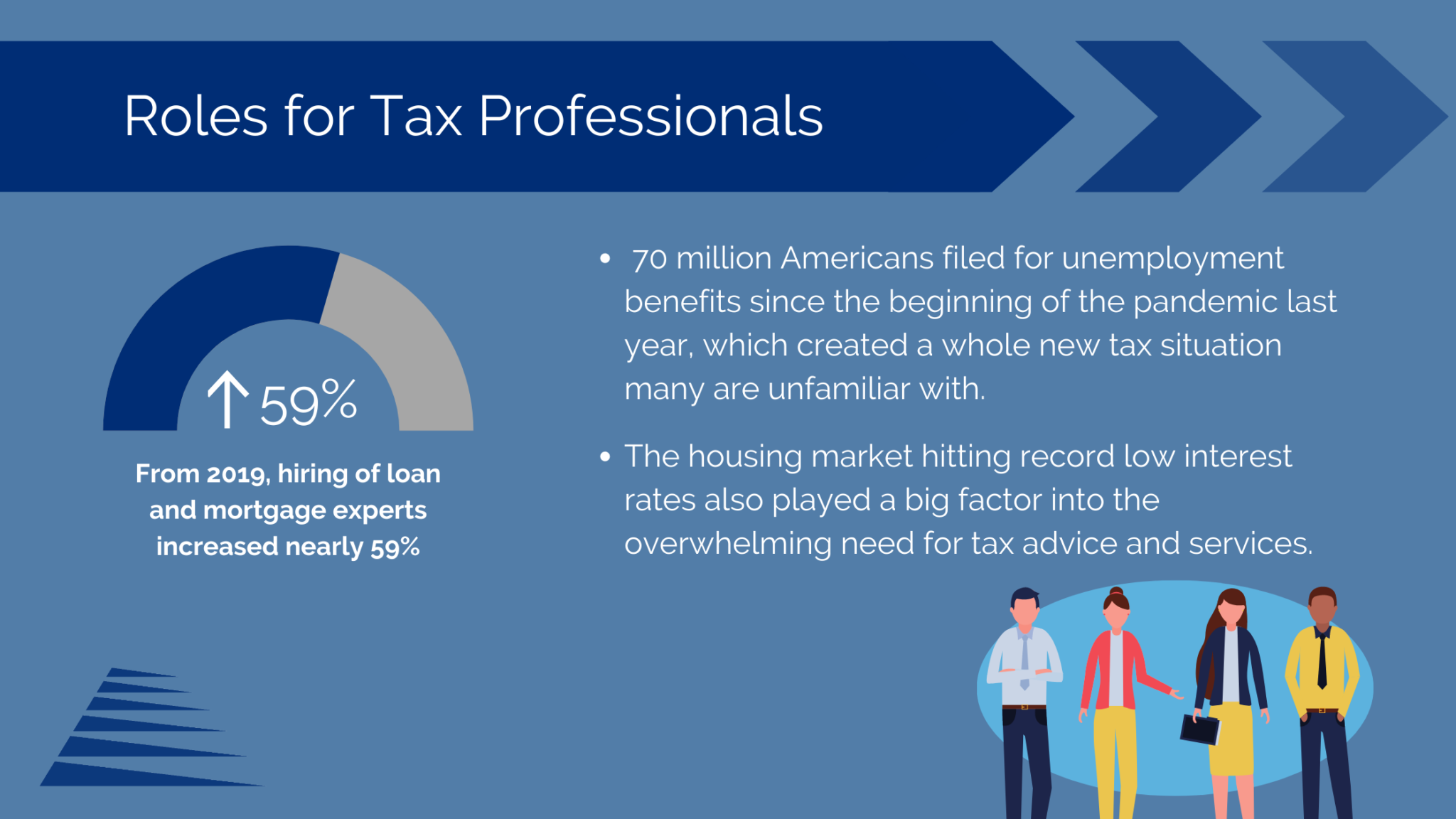 Tax season seems to be a hectic time of year no matter the case, but this year is drastically unique. 2021 has seen a significant increase in people seeking professional help with filing taxes due to all the new and additional steps that have arisen from the pandemic and subsequent housing market. While the year began with a low unemployment rate of 3.5%, by April that figure had soared to 14.7% amid business shutdowns. A staggering number of 70 million Americans have filed for unemployment benefits since the beginning of the pandemic last year, which creates a whole new tax situation many are unfamiliar with. Small businesses are also finding themselves in new territory after applying for and leveraging SBA loans. Even smaller claims from those who received stimulus checks has caused people who may not usually seek out tax help to reconsider this year. Another big factor playing into the overwhelming need for tax advice and services was the drastic change in the housing market. With interest rates at a record low, people were buying homes like crazy and homeowners were refinancing their properties to get better rates. Both instances caused homeowners, new and old, to search for professional assistance. 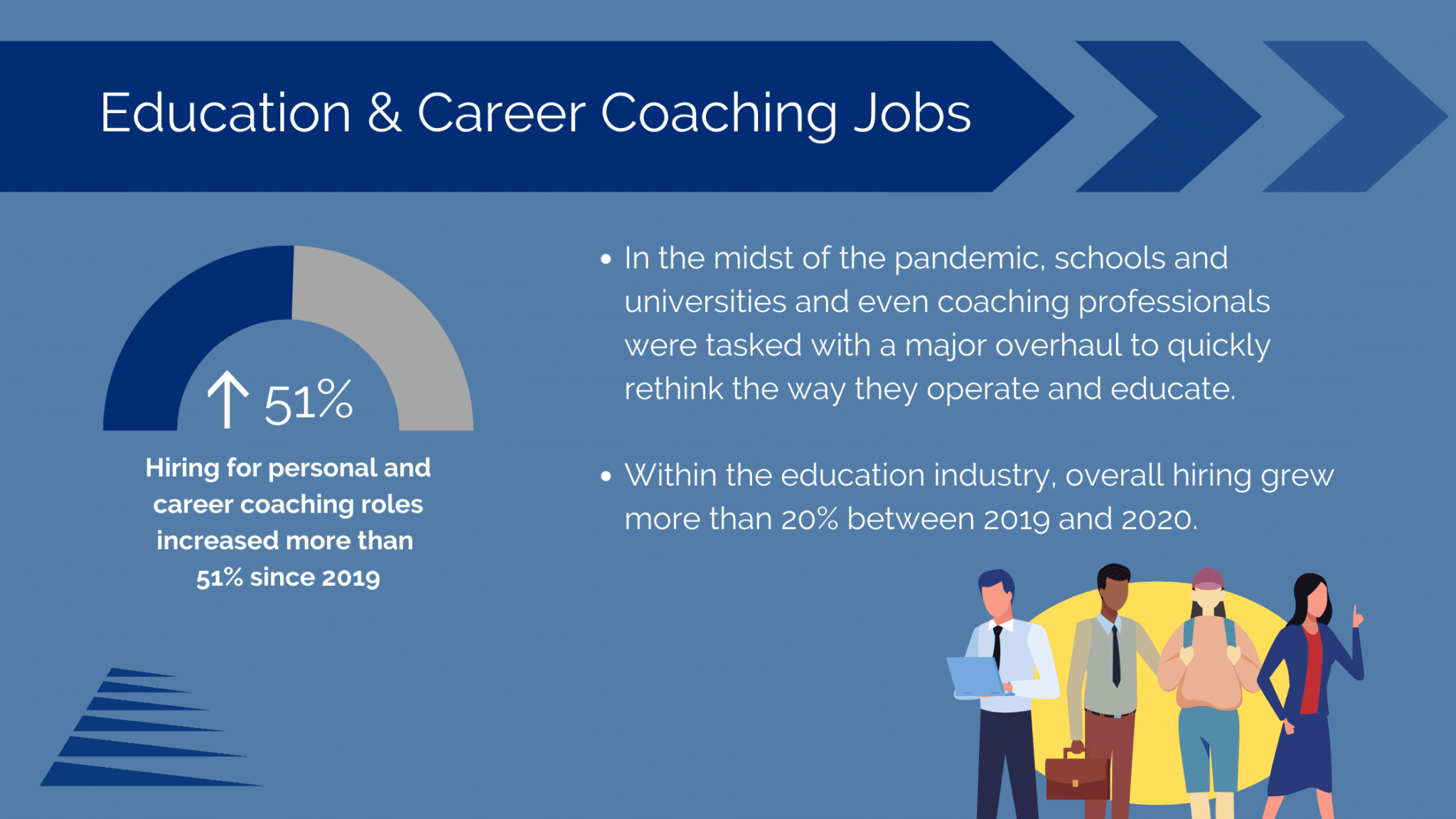 In the midst of the pandemic, schools and universities and even coaching professionals were tasked with a major overhaul to quickly rethink their systems and completely reshape the way they operate and educate. This resulted in an increase in demand for the industry as a whole as virtual education and coaching became much more accessible. Many individuals found the time to go back to school during quarantine and those who were laid off realized the benefits of having an advanced degree in their field. Personal and career coaches also saw a major increase in demand when the state of the pandemic caused many people to reevaluate the direction of their careers, lives, and beyond. Professionals who specialize in life coaching and career planning became hot commodities, surging the industry and becoming extremely in demand today. Virtual learning has proved to be increasingly successful and incredibly advanced as those in the space continue to streamline their processes. This new age of coaching and educating will most likely change the way we learn, not just temporarily, but for the future to come.

With the novel and constantly changing climate of the workforce today, it’s important to adjust and pivot accordingly when it comes to the next steps in your career. Whether you are someone who is looking to make an industry move, or calculate a secure pivot within your existing field, referencing this list can help you dial into a more targeted role and show which skills to highlight. For example, those who have worked in retail will want to hone skills in E-commerce, customer service, and brand marketing to stay competitive in their field. If you have a background in Human Resources, focusing on your skills and experience facilitating D&I initiatives and overcoming challenges in this area could be a smart move. No matter the industry or career path you are on, our recruiters at Blue Signal can help you capitalize on the demand facing your industry. Reach out to us for guidance, or check out our website for tons of helpful resources such as open job boards, industry-specific trends, and blog posts on how to enhance your resume, brand yourself online, or nail an upcoming interview.