Blue Signal recently wrapped up our 4th annual philanthropy initiative, Blue Signal Gives Back. Each year Blue Signal strives to give back to meaningful organizations through a philanthropic donation. Aligning our shared passion for philanthropy with healthy competition, Blue Signal Gives Back has proven to be an employee favorite initiative. In 2018, Blue Signal donated $1,632.50 to the American Parkinson Disease Association. In 2019, $2,052.50 was donated to the Smiths-Kingsmore Syndrome Foundation. Last year, Smiths-Kingsmore Syndrome Foundation won for the second year in a row, receiving $3,986.50. At our 2022 Virtual State of the Signal presentation, Jordan Lawhead was crowned the winner of the 2021 Blue Signal Gives Back initiative, representing the Cystic Fibrosis Foundation. As a result of Jordan’s efforts, $2,105.00 will be donated to the organization on his behalf.

Blue Signal Gives Back: Philanthropy with a Splash of Competition

Each year, Blue Signal makes a donation to a nonprofit charitable organization on behalf of the winner of a metrics-based, company-wide contest. This year, the contest ran from November 29th to December 25th, 2021. The teams consisted of two recruiters or a recruiter paired with a non-recruiter (employees from Operations, People & Culture, Marketing, or Finance) — with some solo team exceptions. Each recruiter or team picked a nonprofit charitable organization that was important to them to represent. Some of the organizations included Veteran One, St. Jude Children’s Research Hospital, Friends for Life, and BeLoved Atlanta.

Recruiters could earn money for their organization by hitting metrics that were assigned a dollar amount, such as candidate send outs and placements. Non-recruiters were able to earn money by answering trivia questions asked in our weekly company meeting. This year, the trivia questions were focused on Blue Signalers’ holiday traditions and memories. Questions included, “Which Blue Signaler would have ‘Merry Christmas, Happy Holidays’ by NSYNC playing in the background as they’re walking down the street, feeling great?” and “Which Blue Signaler thinks the best way to spend a Saturday in December is making a charcuterie board with their family, walking their puppy, and listening to Justin Bieber’s Christmas album?” While these questions primarily served as an opportunity to win points, they also allowed us to learn more about our virtual coworkers!

At the end of each week, our General Counsel Jessica Walsh sent updates on the Blue Signal Gives Back contest standings. The competition was neck-and-neck, as we had ties for first, second, or third place nearly every week. At the end of the competition, the team with the most points won – and Blue Signal matched the monetary amount to make a philanthropic donation in the winning team’s name! This year, Jordan Lawhead dethroned 3x Blue Signal Gives Back winner Ryan Walsh, earning $2,105.00 for the Cystic Fibrosis Foundation. 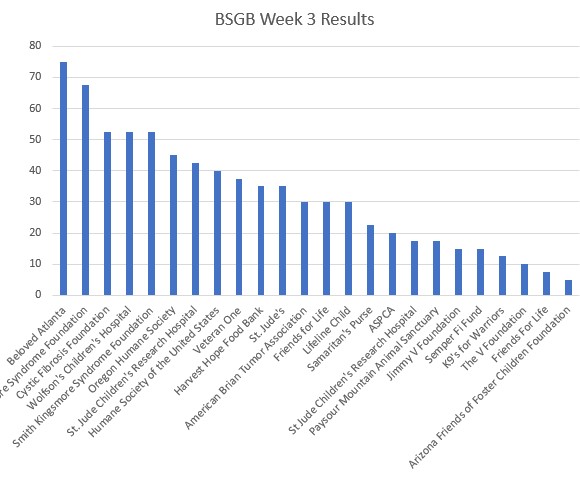 Cystic Fibrosis (CF) is a genetic disorder that affects the lungs, pancreas, and other organs. The disease causes long-lasting lung infections and limits the ability to breathe over time. According to the Cystic Fibrosis Foundation, Cystic Fibrosis affects more than 30,000 children and adults in the US.

The Cystic Fibrosis Foundation was founded in 1955 by a group of parents who aimed to advance their understanding of the disease, create new treatments and specialized care for their children, and find a cure. Dedicated to research, the Foundation has made groundbreaking discoveries including identifying the gene and protein responsible for CF, and discovered more than a dozen new treatments for the disease. Today, the Cystic Fibrosis Foundation funds research with the goal of finding new therapies and treatments for CF patients. 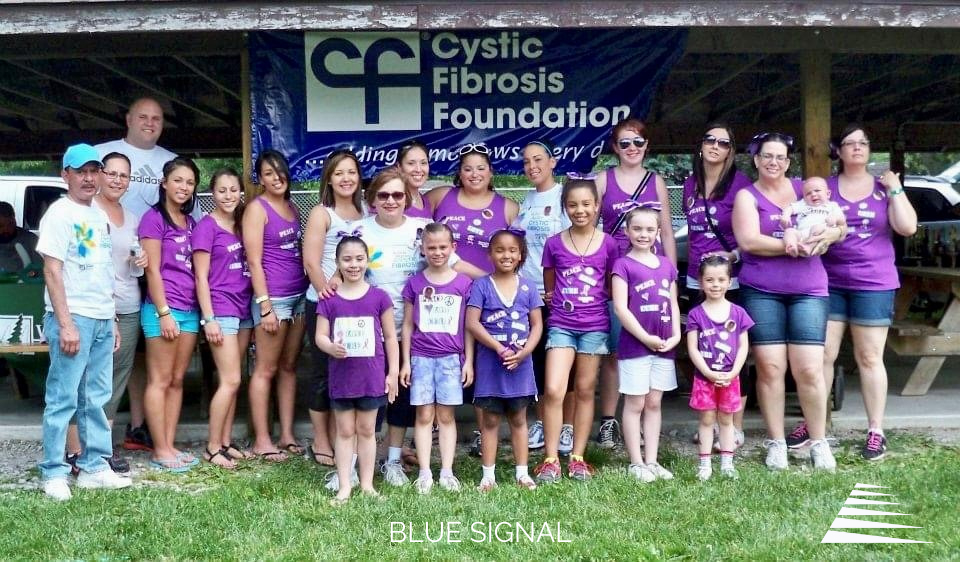 Jordan Lawhead chose to represent the Cystic Fibrosis Foundation for this year’s Blue Signal Gives Back initiative because it is very near and dear to his family’s hearts - Jordan’s niece Marina was born with Cystic Fibrosis and battles the disease daily. Jordan and his family have supported the Foundation in the past by participating in CF walks, fundraisers, and events. Blue Signal is honored to donate to the Cystic Fibrosis Foundation on behalf of Jordan and hopes our donation contributes to their overall mission to increase awareness and find a cure for CF.